By: Sena Christian, The Press Tribune

The Christen family plans to spend Christmas together, just the four of them, at home.

They decorated a plastic Christmas tree, which they arranged in the living room of their house in Lincoln.

“We’re going to keep it quiet and normal,” said Colleen Christen. “In the last six months, things have not been normal.”

Her husband, Ben, serves in the military and returned from South Korea on Dec. 14 for a brief stay, so they want some private family time. Plus, their 2-year-old daughter, Caroline, cannot be around people who might have a cold.

Caroline’s birthday was a few weeks ago, which was celebrated in the hospital as she underwent treatment for neuroblastoma, an aggressive cancer of the nervous system. The cancer strikes about 650 children a year in the United States and has a 10 percent survival rate.

Caroline was diagnosed with neuroblastoma in July, but it was another illness that revealed the cancer.

“She was the happiest, sweetest, most easy-going baby,” Colleen Christen said. “She started walking sideways and within four days she couldn’t walk.”

After several tests over a few weeks and a visit to the emergency room, doctors diagnosed the child with opsoclonus myoclonus syndrome, a rare neurological disorder that affects as few as 1 in 10 million people annually. It affects about 3 percent of children with neuroblastoma. There is no cure.

“You think you’re just going to go home (from the ER) and your world changes that second,” Colleen Christen said.

The condition can cause loss of speech abilities, lethargy, malaise, muscle twitching and more. Caroline mom’s explains it as her body recognizing there was cancer so it made anti-bodies that then attacked her own body. But this condition was how doctors found the cancer.

“It was a blessing they found it,” Colleen Christen said. “The scariest part is the doctors don’t know anything. You ask them questions and they don’t know.”

Doctors removed a cancerous tumor in July and Caroline underwent two rounds of chemotherapy. She’s on a high dose of steroids, which makes her keep on weight, and once a month she gets an IVIG boost for her immune system.

At the hospital, Caroline now knows to put her arm out to get her blood pressure checked and after intravenous therapy, she says, “owie all done.”

Colleen Christen has had to pack up her two kids — she has a 3-year-old son named Nicholas — and head to Palo Alto for chemotherapy once a week for four weeks. She went alone as her husband was deployed overseas.

“She’s a very strong woman and takes care of everything. It’s tough to learn about things through the telephone and Skype,” Ben Christen said. “It was tough being away and not being here to help.”

His wife found support through the Keaton Raphael Memorial, a nonprofit organization based in Roseville that assists children with cancer and their families.

Terri Balbierz, who serves as a family navigator for the organization, connected the Christens with another family experiencing childhood cancer.

“When a family has a child diagnosed with cancer it turns their world upside down,” Balbierz said.

Families incur increased medical and transportation expenses, which causes another burden in addition to the emotional challenges of caring for a sick child, she said.

“Our goal is to help relieve some of the financial burden, connect them to vital resources and bring hope through a community of support that understands the world of childhood cancer,” Balbierz said.

Her organization also sent a treasure chest with blankets and toys for Caroline and Nicholas. Going through cancer is difficult on the siblings, too.

“It was so wonderful,” Colleen Christen said. “It was like Christmas. She was our angel that day. We get phone calls from Terri to see how we are and it’s so nice that someone is thinking about you and just cares.”

As for Caroline, she’s improving but the doctors want to see more progress, her mom said. They’re increasing her dosage of one medication this week. There will likely be side effects, and if the family has to postpone Christmas, they’ll do so.

She has regained her ability to walk — although she’s a bit unsteady.

“We got to see her take her first steps twice,” Colleen Christen said. “You don’t want that to happen, but you appreciate everything so much more.” 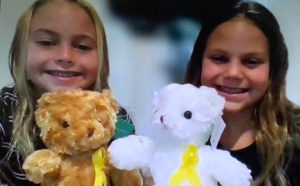 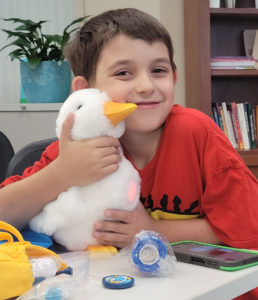 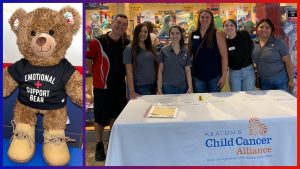 Our Family Navigator team was honored to come alongside Build-A-Bear in Roseville, to host a special and private event for 9 Keaton’s families in our Program.